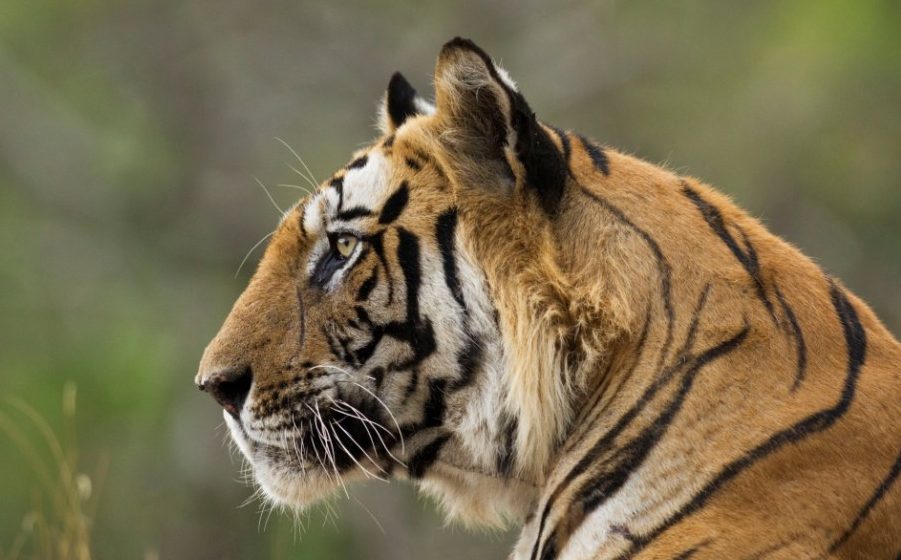 Why MP is one of India’s top tiger states

The MP forest department was fortunate to have committed forest officers with long and stable tenures. For example, between 1970 and 2007, the Kanha National Park had only four park directors. Second, unlike many states, the forests have had decent political support which helped committed officers to create a large number of protected areas since the 1970s.

The Panna Tiger Reserve (PTR) in Madhya Pradesh (MP) is one of the state’s most beautiful forests. Apart from its dense deciduous foliage, the 576- square kilometre park has a spectacular landscape marked by gorges and plateaus, and the free-flowing river Ken, one of the 16 perennial rivers in the state.

The reserve’s idyllic existence, however, received a massive jolt in 2009 when the state realised that the park had lost its entire tiger population (at least 24) to poaching and poisoning, and destruction of forest habitat by evicted encroachers. A few had reached the end of their 15-year lifespan and died of natural causes or illness. The tigers were lost between 2003 and 2008.

The news was an embarrassment for MP, which is one of India’s top tiger states, forcing the government to devise a strategy for the PTR. It decided to reintroduce big cats in Panna; the first one came on March 3, 2009. Today, Panna has more than 47 tigers. According to the 2014 tiger census, MP has 308. The National Tiger Conservation Authority (NTCA) is expected to release a new census report in April, and foresters in MP are hoping to have an even better tally this time around.

The loss of tigers from Rudyard Kipling country (the state’s big four tiger reserves — Pench, Bandhavgarh, Kanha, and Panna — once formed a single natural corridor) was a taint in an otherwise good record of the state’s wildlife conservation history. The Kanha National Park was declared a wildlife sanctuary in 1935 and the state enacted its own MP National Parks Act in 1955. Six of MP’s 10 parks are today part of the prestigious Project Tiger, which began in 1973. The state’s parks have also fared consistently in evaluations. According to a 2014 Management Effectiveness Evaluation process, a global framework to evaluate the performance of protected areas, MP topped the charts; the parks have also done well in ecotourism and parkwise grading done by the NTCA.

There are several reasons why MP has consistently done well over the years, notwithstanding the Panna debacle. First, the MP forest department had several committed forest officers with long and stable tenures. For example, between 1970 and 2007, the Kanha National Park had only four park directors.

Second, unlike many states, the forests have had strong political support, which helped committed officers to create a large number of protected areas since the 1970s. Almost all good uninterrupted forests were converted at a time when there was not much conflict between parks and the pressures of development. Third, the state had a first-mover advantage when it came to wildlife tourism. It was on the tourism map much before modern tourism started because of royal hunting expeditions. The state took advantage of this public memory and was one of the first to create a directorate of ecotourism in the early 1990s. With tourists came funds and infrastructure, and, luckily for MP, many businesspeople, such as resort owners, participated in the development process in a sustainable manner.

During a reporting trip in Panna in 2009, I stayed at one of the jungle camps on the river Ken, and my understanding of the conservation issues was enriched by the inputs of not just the camp’s owners but the local staff too. This involvement of stakeholders — businessmen and the local community — is critical in any conservation process. In fact, MP was one of the early adopters of the joint forest management scheme, which tried to integrate the local people. Last, but not the least, the protection provided to wildlife, especially in protected areas, has been better than in many other jungles of India.

Thanks to its good wildlife management, MP earns well from wildlife tourism. According to the forest department, the state earned Rs 27.54 crore in 2017-18 from just the gate receipts of the parks. And it’s not just the state: Local people are one of the principal beneficiaries from direct employment and non-salaried employment, as guides and safari vehicle owners; 80% of the lodge employees are from local communities. In The Value of Wildlife Tourism for Conservation & Communities (2017), conservation biologist, RS Chundawat, writes: “Wildlife tourism in MP is already proving to be an important tool in funding parks, in nature awareness, in rural poverty reduction and rural uplift, but some key actions are needed to realise its greater potential for sustainable development and wildlife protection”.

Wildlife experts say that MP has the potential to have more tigers and better quality wildlife tourism. To ensure that, the forest department needs more staff, including senior officials who are specialised in wildlife management.

“In the last three years, several forest officers who are specialised in wildlife management have been kept out from field duty due to petty official/administrative reasons,” said a senior MP forest officer. “If the state fails to maintain the institutional setup, then wildlife management will suffer. The state must not lose out on its 65-year-old experience base. Unless you have proper HR in place, you can’t save the forests and wildlife”. The basic issue, said another senior officer, is to undertake institutional course correction at the decision-making level so that the state does not lose its USP and hard-earned wildlife heritage of the last six and a half-decade. Importantly, he added, the state must restart sending forest officers, starting for ranger level, for wildlife training.

In addition, it needs to first protect the main actor — the tiger — by more intensive foot patrolling and surveillance of the parks, conservation of not just core areas but also buffer areas and corridors (the state has one of the most fragmented tiger corridors), expanding the tiger base to the western parts of the state and making the local communities a stakeholder in the process.

“While the tigers are safe in the protected areas, the strength of MP’s status as a top tiger state can be bolstered further if it ensures the safety of tigers in the buffer and wildlife corridors. Otherwise, parks are just big zoos,” said a wildlife scientist, who did not wish to be named.