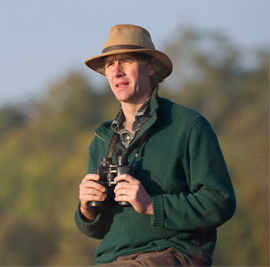 “Sensibly organized wildlife tourism can contribute significantly to tiger conservation in India by directly benefiting local communities and thereby mitigating their antagonism towards tigers. It can help replace unsustainable extractive forest uses. Such tourism can also build a wider constituency in support of tiger conservation both locally and globally. Even more importantly, I believe there is both urgent need and ample opportunity to expand the land-base for tiger conservation outward from protected areas through private public partnerships that involve ecologically sensible and socially responsible wildlife tourism practices. However, it is also a sad fact that the Indian wildlife tourism sector has hitherto paid scant attention to such concerns and opportunities, largely preoccupying itself with short-term profits. In the process, it lost esteem and goodwill of conservationists as well as local communities. I believe there is a lot that industry-based initiatives such as TOFT can do to reverse this unfortunate situation. Those of us who are striving to save wild tigers against immense odds will welcome such initiatives”.

Dr. K. Ullas Karanth obtained his MS degree in Wildlife Ecology from the University of Florida, USA in 1988 and his Doctorate in Applied Zoology from Mangalore University in 1993. Dr. Karanth is currently a Senior Conservation Scientist with the New York based Wildlife Conservation Society (WCS). He is the Director of WCS India Program and Technical Director of the new world-wide WCS Initiative Tigers Forever.

He has conducted extensive long-term research on ecology of tigers, other predators and their prey in Nagarhole Park in India. He has studied predator-prey population ecology in several reserves across India, besides conducting long-term population dynamic studies of tigers in the Western Ghats of Karnataka. His areas of expertise include capture and telemetry of big cats, animal population estimation techniques and resolving human-wildlife conflicts. He pioneered the development of camera trapping protocols, which are now used to estimate numbers of tigers, leopards, jaguars, snow leopards and cheetahs across the world.

His findings have been published in prestigious scientific journals like Proceedings of the National Academy of Sciences, USA; Ecology; PLOS biology, Journal of Animal Ecology, Journal of Zoology, Journal of Tropical Ecology, Conservation Biology and Biological Conservation as well in several scientific books published by Columbia University Press, Cambridge University Press, Island Press. He authored two acclaimed books, The Way of the Tiger and A View from the Machan, and, has co-edited (with Jim Nichols) the book Monitoring Tigers and their Prey.

He is a scientific fellow of the Zoological Society of London and serves on the editorial board of the journals Oryx and Journal of Applied Ecology. He also serves on the IUCN Species Survival Commission’s specialist groups on Cats, Elephants, Wild Cattle and Small Carnivores. Dr. Karanth has also been active in the conservation advocacy and policy arenas and serves as the Scientific Advisor to Wildlife First, a pro-active wildlife advocacy group. He is also the prime mover in a WCS-funded multi-institutional initiative that runs a Graduate Program in Wildlife Biology and Conservation at the National Centre for Biological Sciences at Bangalore. His work on tigers has been covered extensively in national and International media including Nature, Science, Time, New York Times, New Scientist, BBC, Sky, CNN and PBS.