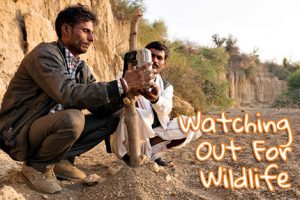 Two of Tigerwatch’s village wildlife watchers set up a camera trap to record wildlife movements on the borders of Ranthambhore. © Tigerwatch

Although tiger numbers were up in India’s last official Tiger Census, poaching and pressures from man remain very real threats to the long-term survival of numerous endangered species in the wild – including the tiger. To address this at a local level where it counts, TOFTigers is supporting a growing network of Village Wildlife Guardians working with wildlife action charity, Tigerwatch, the programme creators, the Corbett Foundation, and the Field Directors and staff at Ranthambhore and Kanha Tiger Reserves – with the support of companies, foundations and individuals like you.

Part time, trained guardians (called VWV’s or volunteers by Tigerwatch), chosen from villages prone to wildlife conflicts bordering Ranthambhore and Kanha Tiger Reserves, two of the world’s most important tiger habitats, now keep their eyes and ears primed for wildlife and illegal activities in and around their homes. This is providing a proactive deterrent for poachers, illegal wood choppers and the bushmeat trade, as well as valuable research on tiger and other wildlife movements to help avoid conflict with humans and support conservation. It’s a powerful protection force that is having an immediate and positive effect on the areas it covers.

A tiger and poacher with rifle cross the same camera trap separated by an hour and a half. ©Tigerwatch

In fact it’s been such a success, the Field Directors want far more guardians. 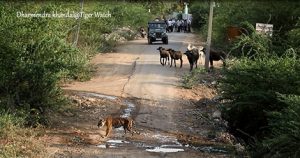 DON’T JUST TAKE OUR WORD FOR IT