MORE ABOUT THE VILLAGE WILDLIFE GUARDIANS

The Village Wildlife Guardians programme was pioneered by NGO Tiger Watch in Ranthambhore in 2013 working in partnership with the Forest Department and funded by TOFTigers since 2014. Local villagers are trained and hired from villages adjoining Ranthambhore Tiger Reserve on a part time basis alongside their existing professions by Tiger Watch to help the Forest Department monitor wildlife activity outside the Protected Areas. Training covers the installation of camera traps, use of GPS and tracking tigers.

Wildlife champions in their village, the Guardians also play a vital role liaising between the Forest Department and villages – for example – paving the way to successfully avoid conflict when a tiger goes astray or ensuring villagers are compensated when livestock is lost.

Monitoring covers a host of activities from poaching for endangered species such as tigers and leopards, as well as critically, prey species such as wild boar, spotted and sambar deer and potential retaliatory killings for lost or threatened livestock. Interference with wildlife dens and intelligence on movements outside the park by a host of other animals such as hyenas, wolves, foxes, and sloth bear are also reported as well as any illegal activities such as trade in endangered flora, logging or mining. There are currently 28 Village Wildlife Volunteers in Ranthambhore funded by a host of sponsors and supporters.

Join our Bike4Tigers Challenge which is helping to raise funding to extend this programme around Kanha Tiger Reserve and through the vital wildlife corridor linking to Pench Tiger Reserve. 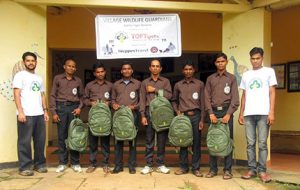 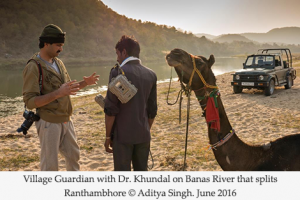