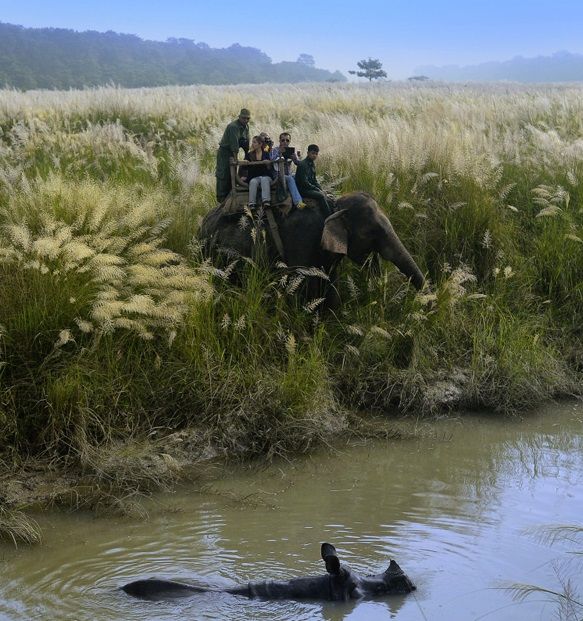 The welfare of captive elephants is rightly a topic of intense debate among tour operators and travel providers, animal managers, conservationists, scientists, visitors, the general public, animal welfare/rights groups and the media. Common concerns, especially on welfare, raised about elephant tourism or elephant safaris in particular are complex in their nature and impact, and call for urgent scientific evaluation as well as for realistic solutions to ensure the sustainable and ethical management of captive elephants in the future.

The interaction between elephants and people has a 5000 year old cultural and commercial history and elephants continue to play a role in the economy. According to the International Union for the Conservation of Nature (IUCN) there are approximately 13,000 Asian elephants in captivity used for tourism, logging and transport throughout the Asian elephant range countries (AsERSM, 2006). It is estimated there are 3600 elephants in captivity in India, mainly used for religious ceremonies, in cities for tourism and a small number kept by forest departments (and most often used in  anti-poaching and protection) and some private resorts in parks across India and Nepal.

TOFTigers recognizing the urgent need to create more awareness about both the problems and the possible solutions as well as provide recommendations to improve health care and management practices for captive and orphaned elephants, and we have based our views on the ACEWG’s recommendations.

In June 2015 a group of regional elephant experts and specialists, veterinarians, researchers and conservationists formed an Asian Captive Elephant Working Group (ACEWG) (www.acewg.org) and in February 2016 they released this statement, and this statement remains good today:

As a group of elephant specialists, veterinarians, researchers, camp managers and conservationists, we recognize the urgency to, proactively and with sound scientific knowledge, address the current situation of elephants in tourism in ASEAN countries.

TOFTigers would wholly endorse this approach from these experts, and campaign with some realistic goals including a proper ‘elephant passport’ system, better training, monitoring and care systems, (of which TOFTigers is in a good position to help with it present PUG monitoring function), a singular desire to stop abuse and neglect and a focus on stopping illegal or spurious wild elephant capture across its range which is severely affecting the health and welfare of wild elephant populations. We will though keep a running brief on progress in these areas.

TOFTigers would highlight to both travellers and its tour operators, where abuse or poor care in prevalent and seen by visitors for it to be reported, with photos to the appropriate park authorities or to contact one of these two organisations: