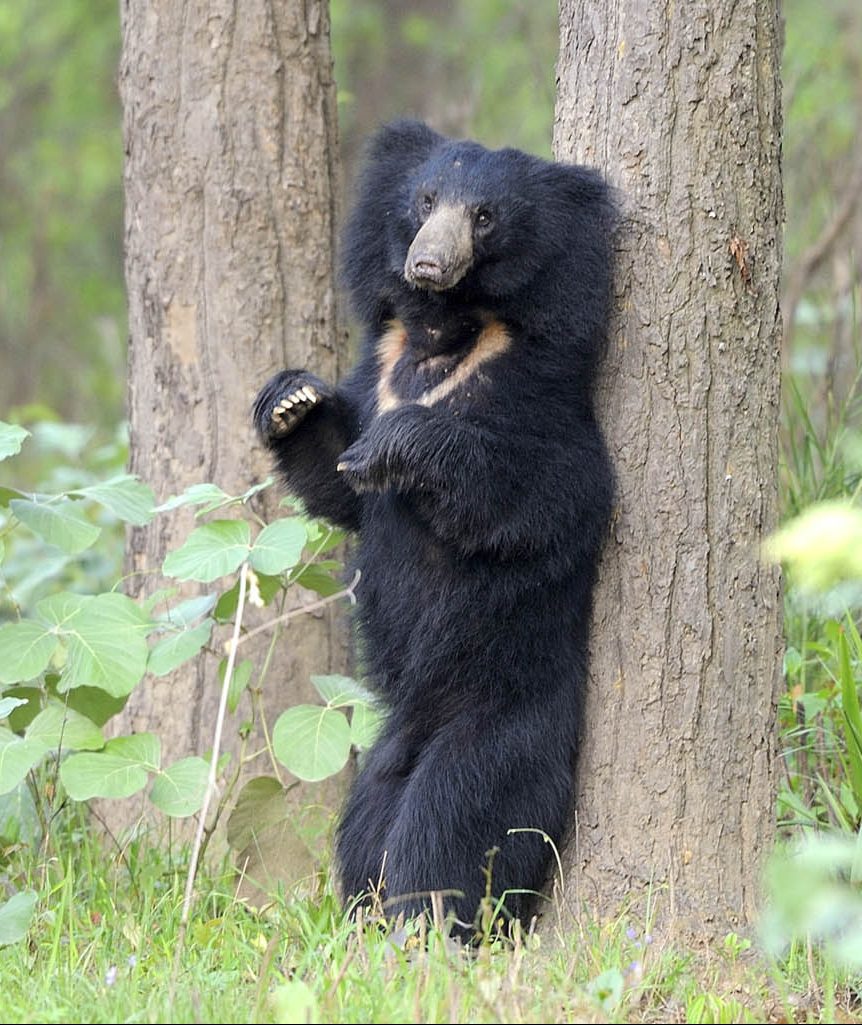 Out in the wild meadows of Satpura National Park a herd of blackbuck are feeding, treading so lightly on their pipestem legs they hardly seem to touch the earth. Langur monkeys, their old men’s faces framed in backlit haloes of silver fur, observe us from a pipal tree, and chital stags with velvet antlers are bellowing at the dawn. Soon it will be time for Holi, the festival that marks the end of winter. No rain has fallen for months and although the trees are still green the sound of falling leaves is everywhere.

By midday the land lies drugged with heat, but inside the forest it is always cool. High overhead the tall trees join hands, creating long aisles of dappled shade, and we walk in a cathedral stillness broken only by the hooting calls of the langurs and the metallic notes of the coppersmith, a jungle bird whose monotonous voice marks each passing second.

It is so peaceful I almost forget I am in India. Until I see the tracks in the dust. Each pugmark is as broad as my hand outspread – clear evidence that a tiger has been here before us. How long ago? Two hours? Two minutes? All I know is that they are fresh, and with a sudden, spine-tingling adrenalin rush I recall the poster at the park entrance.

“You might not have seen the tiger,” it says. “But the tiger has seen you.” Satpura is wild India’s best-kept secret. Named after the hills that cross the park, it was established in 1981 and, until Forsyth’s Lodge opened a year ago, was one of the country’s least-visited parks. Today it offers visitors the rare experience of enjoying a tiger reserve not overrun by tourist vehicles. No more than 10 Jeeps are allowed inside its 210 square miles, and it is the only park where walking in tiger country is permitted.

The lodge was named after Captain James Forsyth, an officer of the Bengal Staff Corps who became one of the first Europeans to explore Satpura. In 1861 he set up the forest department in central India and in 1871 wrote a classic book on the region, The Highlands of Central India.

In Forsyth’s time the British regarded Satpura as little more than a haven for tigers and hill robbers. Even today, in the teeming heart of Mother India, there are gorges and hillsides that have heard no human sound but a woodman’s axe, and the tigers are still there.

Clad in dense forests of teak and sal, braided by streams and steep-sided nullahs – seasonal watercourses gouged by the monsoons – its broken landscapes were never made for vehicles, and that is what brought Hashim Tyabji to Satpura.

Ever since he went to work at Tiger Tops Jungle Lodge in Nepal more than 30 years ago, tigers have been Hashim’s greatest passion. Today he is one of India’s most respected tiger experts and the man who has put Satpura back on the map by opening Forsyth’s Lodge.

Backed by a sympathetic park management, he is trying to offer visitors a different experience to the more popular reserves where tourist vehicles jostle for a glimpse of the elusive tiger.

“I truly believe that walking enables you to get to know and understand the jungle in a way that is simply impossible by Jeep,” Hashim says. The whole point of coming here is to explore the tiger’s domain on foot, just as Forsyth did. It isn’t even about seeing tigers. Their sign is everywhere, in the bones of old kills and fresh tracks in the dust. But when it comes to spotting wild India’s other superstars, notably leopard, wild dog and sloth bear, Satpura has no equals.

Getting to the park entrance is easy: a five-minute drive to the Tawa Reservoir and a boat ride to the other side where the knuckles of the Satpura Hills stand deep-etched against the sky. Then, accompanied by a park ranger, we stride out across the meadows with the strident mee-yow of peacocks ringing in our ears.

In the forest we find evidence of sloth bears. They have been busy in the night, breaking into termite mounds with their cast-iron claws. Our ranger is unarmed and a sudden thought occurs. What happens if we bump into a grumpy bear? “Stand close together,” Hashim whispers. “Then raise your hands and shout like hell.” Today, the sloth bears stay hidden.

Instead, we meet a gaur – the world’s largest wild ox – a pitch-black minotaur with white pop socks and crescent moon horns. Hashim beckons to me to hunker down as it glowers from the shadows. My heart skips a beat, but the moment passes and the bull wanders off.

Even without its megafauna, Satpura is a joy to explore and I love our early- morning walks. Malabar pied hornbills lumber across the sky. Parakeets fizz past like meteor showers and tropical butterflies – blue tigers, common jezebels – flit through the air as the smell of the jungle laps around us.

From Hashim I discover that every tree has its special uses. The leaves of the coromandel make beedis, the roll-up cigarettes that are part of India’s black economy, while the sweet flowers of the mahua make hooch, the jungle firewater whose name has passed into English.

The flowers ferment when they fall, creating a heady brew for birds and bears. Hashim once found a bear that had passed out after a mahua flower binge. “It lay on its back under the tree, eyes shut and legs outspread,” he said, “and I swear it had a smile on its face.” In the afternoons, we returned to the park to explore by Jeep and that was how we found a leopard.

On the far side of a pond it sprawled, yellow coat on fire in the slanting sun. It was the first leopard I had seen in India, a handsome young male with one eye darker than the other, and Hashim knew him well. There was more good luck when we encountered a pack of wild dogs. It was gau dhoolie – the hour when Indian herd boys lead their livestock home in a golden haze of cow dust – and the dogs suddenly emerged from the forest. They loped past, five lean red hunters on a mission.

But nothing matched the joy of walking and the last day was the best of all. For two hours we had followed the trail of the resident tigress – identified by the imprint of a skewed hind foot – and although we lost her in a maze of rocks, her unseen presence was almost palpable.

We came at last to a deep ravine where the Sonbhadra River tumbles out of the hills, forming a chain of pools in which tigers lie when the temperature soars. I could have stayed forever, and Hashim breathed a contented sigh.

“Here, nothing has changed,” he said. “This is exactly how Forsyth saw it in the 1860s. Wild India as it used to be.”